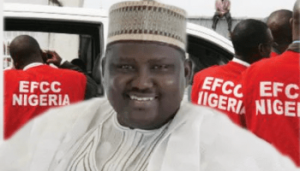 The Economic and Financial Crimes Commission has not applied to the International Police for the arrest of fleeing former Chairman of the Presidential Task Team on Pension Reform, Abdulrasheed Maina.

It was gathered on Saturday in Abuja that the anti-graft commission had not made a formal request to the Nigerian bureau of the INTERPOL for the fugitive to be placed on the agency’s wanted list.

A highly-placed source explained that Maina had not been declared wanted because no agency had made a formal request to the INTERPOL on the issue.

A check on the INTERPOL website also showed that the former pension reform chairman had not been placed on the wanted list of the international agency.

This is coming almost a month after the Senior Special Assistant to the President on Media and Publicity, Garba Shehu, claimed that INTERPOL had issued a fresh warrant for the arrest of the embattled director.

He had told newsmen to on October 26, 2017 that “Maina’s investigation has been expanded.”

“This is beyond reinstatement. It has gone beyond that. You know that the INTERPOL has just issued an international warrant on him. A Nigerian court has also issued yet another warrant of arrest,” he had said.

But sources said the EFCC might not be keen on arresting Maina, which is behind its reluctance to re-apply for him to be placed on the wanted list.

“From the look of things, the EFCC or those in government are not keen on arresting Maina and that is why no formal request for his arrest had been made to the National Central Bureau of the INTERPOL,” a source explained.

It was learnt that the process for issuing an arrest warrant involved a formal request from a national investigative agency to the INTERPOL, which would, after consideration of the request, mandates its member states to issue red notices for the suspect.

It was further gathered that the international wanted notices were usually issued by the INTERPOL headquarters in Lyon, France, at the request of a member country.

It was gathered that the INTERPOL would not issue a wanted notice against Maina until the Federal Government had fullfilled certain conditions, including proving he had committed a crime and tendering the warrant of arrest his arrest by any law enforcement agency and the court.

The government, it was gathered, was also expected to present an assurance that the fugitive would be extradited if arrested anywhere in the world.

Efforts to get the EFCC’s spokesman, Mr. Wilson Uwujaren, did not succeed as he had yet to return calls to his telephone and had yet to respond to a text message sent to him as of the time of sending this report.

Meanwhile, facts have begun to emerge that Maina’s reinstatement might have been facilitated by the Permanent Secretary, Ministry of Interior, Abubakar Magaji, SUNDAY PUNCH has learnt.

Investigations by our correspondent in Abuja indicated that the permanent secretary had allocated an office to Maina before he received a directive from the Head of Service, Winifred Oyo-Ita, to reinstate the embattled ex-pension task team chairman.

A source in the ministry said, “From all indications, it was the permanent secretary, who allocated an office to Maina without waiting for the letter of reinstatement from the head of service.

“It is true he (the PS) was not in the ministry when the decision to reinstate Maina was taken at a senior staff committee’s meeting just as he told the House of Representatives’ committee last week, but when he resumed in July, he was aware of all that happened.”

Following a letter to the Federal Civil Service Commission dated April 27, 2017, by the Attorney General of the Federation, Abubakar Malami, which directed that Maina should be reinstated into the civil service, the commission asked the interior ministry to convene a senior staff committee meeting.

At the meeting, it was agreed that Maina should be reinstated as a deputy director. It was gathered that the meeting, which was held on June 22, had in attendance two commissioners from the FCSC, Hassan Sokodabo and Ibrahim Kehinde, and a representative of the HoS, Sebastian Nalok.

Our correspondent learnt that the SSC meeting recommended that Maina be reinstated and placed on Level 16 as deputy director which was his grade level before he fled the country.

He said, “After the decision to reinstate Maina was agreed upon at the senior staff committee meeting of the ministry, the recommendation was sent to the FCSC which approved it.

“It will be noted that the recommendation from the ministry was not binding on the FCSC and the commission was also not also expected to carry out the AGF’s directive because it doesn’t take instructions from him.

“As it is the practice in the civil service, the HoS was expected to send the letter of reinstatement to the ministry’s Permanent Secretary or Maina’s immediate boss who will then present the letter officially to him, but Oyo-Ita withheld the letter because she felt the proper procedure was not followed.”

The source explained that Maina had not officially received the letter before Magaji, who had resumed in the ministry as permanent secretary, allocated an office to him.