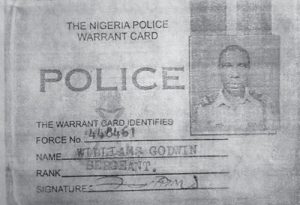 A police sergeant identified as Williams Godwin, alongside some highway robbers was allegedly were involved in the robbery of a commuter identified only as Henry.

It was learnt that the 41-year-old victim was on his way to work when he joined a cab along the Lagos-Ibadan Expressway en route to Lagos Island.

He was said to have been attacked at gunpoint, as the assailants, which included Godwin, allegedly dispossessed him of his ATM card and N4,000.

However, during the incident, the policeman’s ID card allegedly fell into the luggage of the victim, who was rushed to the Lagos State Accident and Emergency Centre at Toll gate, Ojota, where he was admitted and treated.

One of those who rescued Henry told PUNCH Metro that he was stabbed with a sharp object in the back.
The ID card

He said, “The incident happened on Wednesday, October 18, 2017. The man was going to work on the Lagos Island when he boarded the private car. Along the way, they pointed a gun at him and took his ATM card and the N4,000 in his bag. While the policeman was ransacking the man’s luggage, his ID card fell into the man’s bag. They stabbed him with a sharp object and dropped him off.”

When newsmen visited the centre, it was confirmed that Henry was indeed admitted to the facility.

A worker, who spoke on condition of anonymity, said incidents of car robberies, aka One Chance, had become regular in the area.

She said passersby and sympathisers, who sighted victims of such attacks, sometime called the emergency toll-free lines through which the centre got notifications.

She said, “Yes, the man was brought here. I think he’s about 41-year-old. He said he boarded a private car, which he thought was a cab. He was seriously injured and we had to treat him. He had the ID card of the policeman that he claimed was among those that attacked him.”