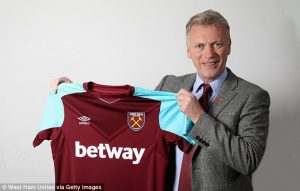 The former Everton, Manchester United and Sunderland boss was handed an initial six-month deal, that will see him lead the club until the end of the season, after replacing Slaven Bilic who was sacked on Monday.

The Croatian coach Bilic was sacked in the aftermath of 4-1 defeat by Liverpool, and after managing to win two games from 11 Premier League matches before leaving the club in the relegation zone

David Moyes is expected to resume his new duty today ahead of his first match against Watford on November 19.

‘It’s a big job we have in hand now but I’m sure with everybody together we can get the right results between now and the end of the season.’