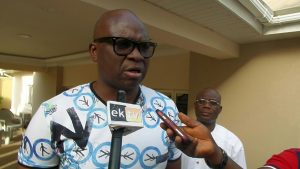 Governor Ayodele Fayose and the All Progressives Congress in Ekiti State have disagreed over the state’s N56bn debt profile allegedly released by the Debt Management Office.

While the opposition APC said that the latest debt figures confirmed its position that Fayose was deliberately borrowing recklessly, the governor said “there is no recent bulletin from the DMO website concerning debt owed by any state as claimed in the false report.”

In a statement on Monday, the state APC Publicity Secretary, Taiwo Olatunbosun, accused the governor of spending the borrowed money on white elephant projects awarded to companies belonging to his cronies for personal benefits.

He berated the governor for allegedly always lying to the public, saying the latest revelation had put to rest his “shameless lies in pursuit of fraudulent agenda for personal benefit while workers are unpaid for nine months.”

Olatunbosun added, “How can Fayose commit the state to so much debts, collect over three years allocations and other financial reliefs from the Federal Government, yet he is owing workers and pensioners for months?

“He is taking advantage of every opportunity to criminally exploit the Ekiti people, many of whom are sick; others are dying while the governor and his family members are contractors executing inflated contracts.

“Fayose will surely account and pay back every penny he and his family took from Ekiti coffers through his white elephant projects, and for the first time, he will know that Ekiti people are no fools that he calls them.”

However, the Ekiti State Government condemned the report that the state borrowed N56bn since Fayose assumed office and that a fresh N25bn loan was applied for.

In a press release on Monday, the Special Assistant to the Governor on Public Communications and New Media, Lere Olayinka, said, “There is no recent bulletin from the DMO website concerning debt owed by any state as claimed in the false report. Nigerians, especially Ekiti people, can visit the DMO website for further clarification.

“The only fresh loan taken by the government of Fayose was the N10bn grant from the Excess Crude Account, which was released to all states for capital projects, N2.8bn requested from the Wema Bank to pay the State Universal Basic Education Board counterpart fund out of which N1bn has been accessed and N600m for MDGs counterpart fund, which has been repaid.”