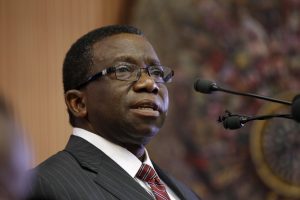 The Minister of Health, Isaac Adewole, on Friday in Abuja said 10,000 Nigerians die annually due to agony and lack of basic equipment for treatment of cancer.

Mr. Adewole said this at the inauguration of the National Hospital’s Radiotherapy Centre with new Multilleave Lenear Accelerator for cancer treatment.

He attributed the number of deaths to lack of necessarily equipment and resources to attend to cancer patients.

The minister who described cancer as a worldwide disease that kills more people than the combination of Tuberculosis, infectious diseases and HIV, decried the lack of resources to cushion the effect of cancer.

He said: “Based on the review of International Atomic Energy Agencies of all countries conducted in 2013 only South Africa and Egypt have the capability of treating cancer,” and described the situation as worrisome.

Speaking on the inaugurated facility, Mr. Adewole commended the Wife of the vice president, Dolapo Osinbajo, for her passion in addressing the plight of cancer patients.

He emphasised that such passion had made it a reality for the centre to be operational and described it as a measure toward alleviating the plight of patients.

Noting the presence of one Multilleave Lenear Accelerator machine at the facility at the moment, he assured of increasing the number to two in order to forestall challenges of patients in the event of breakdown of one.

The minister pledged the Federal Government’s commitment to upgrade other seven cancer centres next year in order to minimise the burden of cancer and associated death rates in the country.

“What is important is that the machine has been put to work and upgraded and it is an opportunity for linking those network, treatment modalities that are new.

“Anybody coming to this centre will get the right treatment. With the right complaint, we will minimise our treatment damages to neighbouring organs so that we can be more precise with respect to treatment that we offer.

“We are making moves to have two new machines that can treat people and also pledge to complete this centre to become the first of its kind in Nigeria,’’ Mr. Adewole said.

Mr. Adewole who noted the standard practice of one machine to one million people, emphasised that considering the population of the country, Nigeria required 200 of such machines across the seven cancer centres in the country.

According to him, if such machines are in place they will adequately meet the challenges of the populace with regard to cancer care.