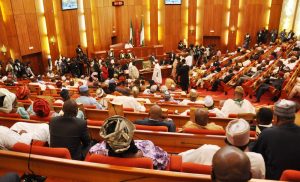 The request by the  Presidency to move N135.6bn to other pressing sub-heads in the 2017 budget five months after the request was submitted to the National Assembly is yet to be approved.

Both chambers of the National Assembly, on Tuesday, said that the virement, which seeks improved funding of key projects, including the Lagos-Ibadan Expressway and the Second Niger Bridge, had been overtaken by events.

Vice-President Yemi Osinbajo, as the Acting President while President Muhammadu Buhari was in London on medical vacation, had, on July 20, 2017, written to both chambers of the National Assembly seeking approval for the re-allocation of some funds in the 2017 budget.

The Senate, however, did not treat the request until November 6, 2017, when it was referred to the Committee on Appropriations. The committee has yet to present its report to the chamber as of the time this report was filed.

The executive and the National Assembly had clashed after Osinbajo signed the 2017 Appropriation Bill of N7.441trn into law on June 12.

Both arms of government disagreed on the reduction of budgetary allocations to key projects, including budgetary votes to the Lagos-Ibadan Expressway and the Second Niger Bridge.

The contractors, reconstructing the Lagos-Ibadan Expressway – Julius Berger and RCC – suspended work on the highway, described as the most important in the country, in July due to mounting debts by the Federal Government.

The lawmakers had reduced allocation to the work on the road from N31bn to N10bn while the National Assembly added N10bn to its allocation to take its budgetary allocation from the previous N115bn to N125bn, ascribing the increase to inflation.

The executive had, in July, submitted the virement request as part of efforts to inject more funds into the dilapidated highway, the new Niger Bridge and other critical projects.

Speaking with one of our correspondents on the telephone, the Vice-Chairman, Senate Committee on Appropriations, Senator Sunday Ogbuoji, blamed the delay on committees which supervised the Ministries, Departments and Agencies affected by the virement.

“We have yet to get feedback from the committees who have the responsibility. That is why we have not presented the report.”

When asked what the fate of the request was when the National Assembly has started working on the 2018 Appropriation Bill, Ogbuoji said, “You will know as we progress. That report must be laid before the Senate.”

A member of the Committee on Appropriations, Senator Mao Ohuabunwa, was asked about the status of the request at the committee stage, he said, “I can’t remember.”

He was, however, reminded that the request was made by Osinbajo in July. He was also told the amount and the committee it was referred to.

In his response Ohuabunwa said events had overtaken the process, adding that the 2018 budget was already being prepared and would soon be passed, leaving the 2017 Appropriation Act expired.

“How can somebody even be talking of virement now when we have treated MTEF/FSP (Medium Term Expenditure Framework/Fiscal Strategy Paper) and the processing of the 2018 budget is on?” he asked.

When asked if the 2018 budgetary process had any implications on the approval of the virement request, Ohuabunwa stated, “It has been overtaken by events. By bringing a new budget and as we are processing it, every other thing is nullified.”

A breakdown of the virement showed that in the Ministry of Transportation, N66bn would be moved into projects, while N46bn was recorded for the Ministry of Power, Works and Housing.

The Federal Capital Territory Administration will move N3bn and another N2.8bn in the Ministry of Water Resources.

Also, the House of Representatives, on its part, said the N135.6bn virement was no longer relevant because attention had shifted to the 2018 budget.

The Chairman, House Committee on Works, Mr. Toby Okechukwu, told The PUNCH on Monday that the approval of the virement was no longer important.

Okechukwu also told newsmen that the target of the House was to provide adequate funds for the Lagos-Ibadan Expressway and the 2nd Niger Bridge in the 2018 budget.

However, he explained that the amount of money to be put into the projects would be determined by the outcome of an investigation about to be conducted into their funding status by the House.

Okechukwu added, “There is a House resolution to investigate the exact funding status of the Lagos-Ibadan Expressway and the 2nd Niger Bridge.

“We have to fully establish whether the projects are being funded through Public Private Partnership or they will be through total budgetary allocations by the government.

“Whichever is the outcome of the investigation will determine what further actions the House will take.

“But definitely, there will be adequate funding of the projects in 2018.”