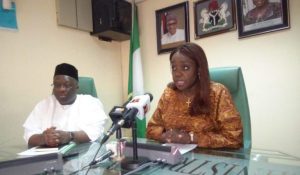 The Minister of Finance, Kemi Adeosun, on Thursday said her decision to suspend the embattled Director General of the Securities and Exchange Commission, Mounir Gwarzo, followed his attempt to blackmail her over the ongoing probe of Oando Plc.

Speaking to journalists on Friday in Abuja, Mrs. Adeosun said ahead of his suspension, Mr. Gwarzo threatened to leak information to the media.

She said the “threat of blackmail” only strengthened her resolve to punish the DG.

“Mr. Gwarzo personally delivered the memo using SEC staff seconded to the office of the Minister, in breach of normal procedures for the receipt of mail. The copy of the memo in the possession of the Minister was delivered with a message that any action against Mr. Gwarzo would result in same being leaked to the press. It was this threat of blackmail that strengthened the resolve of the Minister to suspend Mr. Gwarzo and allow the Administrative Panel of Inquiry to proceed with its probe,” Mrs. Adeosun said in a statement.

She denied that the SEC boss was suspended due to his refusal to stop the forensic audit of Oando Plc, saying the allegation was “misleading and mischievous.”