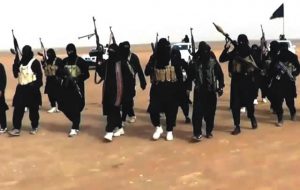 ISIS has claimed responsibility for a suicide bomb attack on a Shiites cultural centre in Afghanistan’s capital, Kabul, that left 41 people dead and dozens injured.

Two children were among the dead and 84 people were injured in the blast, according to a Health Ministry spokesman.

It also hit the Afghan News Agency, which has an office on the floor above, Afghan Interior Ministry spokesman Nasrat Rahimi said.

Two more blasts followed at the same building, but caused no injuries.
The ISIS-affiliated Amaq News Agency said the terror group carried out the attack.

A crowd of just under 100 people were meeting at the cultural centre to mark the anniversary of the Soviet invasion of Afghanistan when a bomber infiltrated the crowd and detonated the device, according to journalist Ehsanullah Amiri, who was at the scene.

Ambulances and police vehicles ferried the dead and wounded to nearby hospitals, Amiri said, as security forces cordoned off the site and blocked the main road approaching the scene.

Authorities also warned onlookers to stay away from the site of the explosion, where there is also a Shiites mosque.