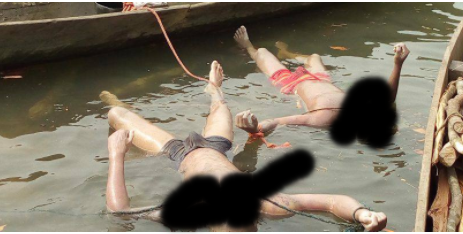 According to reports, the students identified as Aniekan Harry and Uche Okoli had sneaked out of their school on Thursday December 7th with six other students to go play football.

It was gathred that after playing football, the students were on their way back to school when their deceased colleagues told them they would like to take a deep in the River.

Owen Oscar, one of their colleagues who also sneaked out of school, said they advised the victims not to go swimming but they refused and went ahead to swim.

Getting to the River, Harry slipped into it while Okoli jumped into it.

Trouble started when the students could not find Okoli and Harry in the River.

The marine police officers around the River were alerted and a search for the victims began.

After two days of searching, their bodeis were discovered yesterday, Saturday December 9th.

Confirming the incident, the spokesperson of the Akwa Ibom Police command, DSP Bala Elkana, said the remains of the victims has been deposited at the state morgue.

See the graphic photo below;