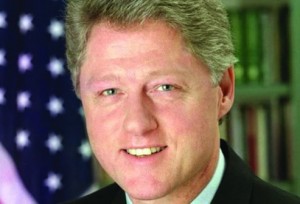 Former American president, Bill Clinton, on Friday disagreed with Donald Trump on his statement about Haitians and African, calling them “Shitholes”

Mr. Trump reportedly called immigrants from Haiti and African countries people from “Shitholes” during an immigration meeting in White House. He has, however, denied the controversial statement.

In a facebook post in memory of those who lost their lives in a earthquake in Haiti eight years ago, Mr. Clinton said working for the UN in Haiti is one of the great honours of his life.

“I’m remembering the Haitian Minister of Finance who came to work the day after losing his ten-year-old son. And the artist who was displaying his paintings on the street just a few days after he lost his wife and children. They radiated courage and determination, saying that making a new beginning was the best way to honor their loved ones.

“Working in Haiti, for the U.N. and as a private citizen, is one of the great honors of my life. I have found the people to be creative, hardworking, brave, and persistent.

“They have not often had the government the people deserve, but that does not make them the country the president described. I can say the same about other nations in Central America and Africa swept up in his epithet.

“We should do what we can to help them reach their full potential, and we should be grateful for the immense contributions made by immigrants from Haiti—and other nations—to America. They are doctors and nurses, entrepreneurs and elected officials, workers and farmers—they and their homelands deserve our respect and gratitude.

“On this day, we remember Haiti. They have come a long way in 8 years, but much work remains and I still believe in the Haitian people.”