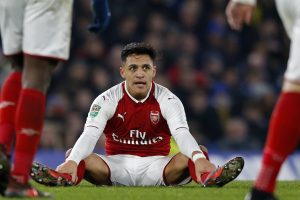 Manager of Arsenal Football Club, Arsene Wenger confirmed that the future of  Alexis Sanchez at the Emirates, will be resolved imminently after the Arsenal forward was left out of his side’s 2-1 defeat at Bournemouth.

Manchester United have emerged as strong contenders because of their willingness to meet Arsenal’s £35 million ($48 million, 39 million euros) asking price, with the possibility of Henrikh Mkhitaryan being included as part of any deal.

Wenger insists all options remain open but felt unable to select the player for the visit to the Vitality Stadium although he insisted Sanchez was willing to play.

“Alexis would have played,” said the Arsenal manager. “But it’s a difficult period for him. He’s always been committed until now but he could have moved yesterday, today or not.

“It will be decided in the next 48 hours. It was a bit difficult for him because he was on standby, a little bit. That’s why I decided not to do it. He did not refuse to play.”

Asked if a deal was imminent, Wenger said: “I don’t master the rhythm of that but it could happen today, tomorrow or not at all. That’s why I didn’t take a decision (to select him)…I didn’t want to travel with him and suddenly he goes somewhere.”

Wenger, who criticised his side’s lack of cutting edge as they squandered a number of chances before allowing Bournemouth to recover from falling behind to Hector Bellerin’s opening goal to win through strikes from Callum Wilson and Jordon Ibe, insisted he would recruit a new forward to replace Sanchez if the forward left.

“Look, if Sanchez goes we need to replace him,” he said. “I say when you look at today, we missed many players in our squad. And you say that they have a weight in the team.

“If players like Sanchez go, we have of course to respond to it. Will he go or not, I don’t know, but at the moment, it’s transfer period and in this kind of periods, you try to use the players who are completely focused on being at the club.”