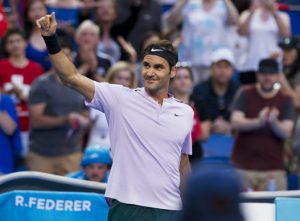 Defending champion Roger Federer may, breezed to the Australian Open lights to waltz through to the second round with a straight sets win over Aljaz Bedene on Tuesday.

The ageless Swiss marvel, rated as the favourite to win his 20th Grand Slam title, thrilled the Rod Laver Arena crowd with a virtuoso performance.

It improved his Australian Open record to 88-13 in his 19th campaign Down Under.

Federer, who insists he is too old at 36 to be rated the tournament favourite, put away the 51st-ranked Slovenian with a catalogue of his signature shot-making.

“My dream was always to play a long time on tour and we had a few guys playing a long time and I think that inspired me,” he said post-match.

“I’m loving it and hopefully I can play for a little longer.”

Federer raced to the first set in 26 minutes and claimed the second on his fourth set point as Bedene raised his level.

The Swiss great thrilled the centre court night crowd with an exquisite curving forehand down the line and past Bedene for another service break early in the final set.

Federer is coming off an extraordinary 2017, when he won a fifth Australian Open title and a record eighth at Wimbledon, and the way things are shaping there could be yet more glory with his main threats scrambling to be ready.

It was in Melbourne a year ago where he lit the fuse on his late-life tennis renaissance, beating Tomas Berdych, Kei Nishikori, Mischa Zverev and Stan Wawrinka before downing great rival Rafael Nadal in a five-set final classic.

“I was thinking a lot about what happened at the tournament last year because it was my favourite tournament of the whole season … it was such a surprise,” Federer said.

“I’m hoping for it to go well again, I’m not sure it can go this well because last year was so good.

“I’m a year older and guys are coming back … I can’t control it all.

“Last year was last year … it could be my favourite year of my career. I’ll keep working hard and see what happens at the end.”