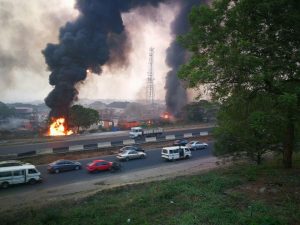 At  least seven  people lost their lives on Monday after gas explosions rocked the Ikosi Isheri and Badagry areas of Lagos State.

While two people died after a gas leakage triggered an explosion in a gas plant on CMD Road, Ikosi Isheri, five residents were killed after a gas transload went awry in a retail shop in Ajara, Badagry.

Aside from the two people who were burnt beyond recognition, eight others reportedly suffered varying degrees of burns.

Our correspondent gathered that there had been a gas leakage in the plant and while officials of the Lagos State Fire Service were assisting to fix the problem, the exhaust pipe of a speeding vehicle triggered an explosion.

Workers of the company, together with a firefighter, were said to have been thrown off by the impact of the explosion, as the fire consumed equipment and installations in the facility.

The inferno destroyed three gas reservoir tanks, a 33,000-litre gas truck, the administrative block of the plant, generators, gas cylinders and other equipment.