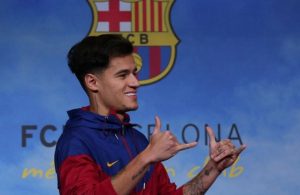 Brazilian midfielder, Philippe Coutinho, has officially been unveiled as a  on Monday as a Barcelona player, the fee of €160m ($192m) move, making him the third richest in history.

The 25-year-old former Liverpool playmaker will be officially presented to the world’s media after Barca coach Ernesto Valverde predicted the Brazilian would comfortably fit into a team already containing global superstar Lionel Messi.

In a video message on Sunday showing Coutinho posing for photographers at the Camp Nou wearing a Barcelona jacket, he said: “I want to play, win trophies and make the supporters happy. Those are my objectives.

Coutinho has agreed a deal through to 2023 and is looking forward to playing alongside Messi, Luis Suarez and Andres Iniesta.