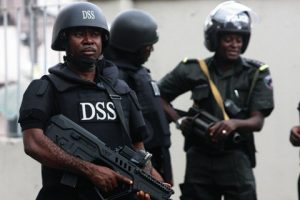 President Muhammadu Buhari met with the leadership of the National Assembly led by the Senate President, Bukola Saraki at the Aso Rock Villa.

Mr. Saraki who spoke briefly at the end of the meeting said they were at the villa to brief the president on the decisions and resolutions of the Senate regarding the Benue crisis.

The Senate had during plenary on Tuesday given the Inspector General of Police, Ibrahim Idris, 14 days to arrest and prosecute the perpetrators of violence in Benue State. Over 70 people have been killed in Benue in 2018 in attacks by suspected herdsmen.

A Senate committee report said ‘faceless people’ were sponsoring and harbouring foreign mercenaries who have been perpetrating killings in Benue and other parts of Nigeria.

Mr. Saraki on Tuesday told reporters at the Villa that they successfully briefed the president, who received them well.

On his part, the Senior Special Assistant to the President on National Assembly matters, Ita Enang, commended the Senate for its “robust debate on the crisis devoid of sentiments.”

The Senate’s interim report by the ad-hoc committee on the review of the current security infrastructure in Nigeria noted that the situation in Benue is a manifestation of the larger security crisis in Nigeria.

The chairman of the committee, Ahmed Lawan, who led the committee on a visit to Benue State presented the report on Tuesday.

“It is very clear from our interaction that some faceless people are sponsoring and harbouring the well trained foreign mercenary elements and using them to unleash violence and criminality in Nigeria‘s rural space,” Mr. Lawan said.