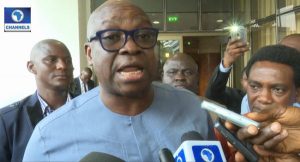 Former Commissioner for Finance in Ekiti State, Mr. Dapo Kolawole, has filed a N20bn suit against Governor Ayodele Fayose and two of his aides for alleged libel.

In the suit filed before a Federal High Court, Abeokuta, Kolawole is praying the court for an order that the outstanding sum of N11bn being awaited as refunds from the Federal Government on Ado-Ifaki Road should not be given to the Fayose administration as the road was constructed by the Kayode Fayemi regime.

Kolawole is demanding damages of N10bn each from Fayose’s spokesman, Lere Olayinka and a House of Assembly member for alleged criminal libel and defamation statement they made against him on a television and radio programme.

The two officials had claimed that Fayemi and Kolawole plunged the state into N85bn debt that would not be liquidated until 2036.

Other prayers of Kolawole include an order mandating the EFCC to investigate the circumstances for the diversion and breach of the appropriation laws of Ekiti State through the cancellation of the original contract – the Ikere-Iju-Ondo boundary dualisation, without first ensuring that all laws and process of the Ekiti State Government were strictly adhered to.

Kolawole also asked the court to grant him an “order directing that any further disbursement of bailout funds, Paris Club, grants or other reimbursement due to Ekiti State, being Federal Government’s palliatives, shall be disbursed directly through a committee of the EFCC, AGF, Federal Ministry of Finance, state’s Accountant General and Auditor General as well as the Auditor General for Local Government of Ekiti State.”