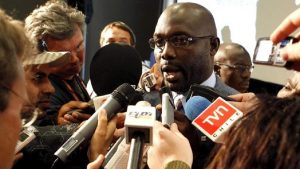 President elect of Liberia, George Weah will be sworn in as Liberia’s new president on Monday, a landmark moment that marks the troubled country’s first peaceful democratic transition since 1944.

Weah will become the 25th president of the West African nation, taking power from President Ellen Johnson Sirleaf after 12 years, with expectations running sky-high among Liberians that he will deliver on his promises of jobs and better schools.

The inauguration is due to begin at 9.45 am (0945 GMT) in Samuel Kanyon Doe stadium near the capital, Monrovia, with heads of state from Ghana, Mali, Nigeria and Togo expected to attend along with friends and former colleagues from his football years.

Weah played for a string of top-flight European teams in the 1990s and was crowned the world’s best player by FIFA and won the coveted Ballon d’Or prize, the only African to have achieved this.

After losing his first run at the presidency to Sirleaf in 2005, he has spent the last 13 years attempting to gain the political credibility to match his wild popularity at home, becoming a senator in 2014.

Volunteers were putting the final touches to decorations and giving the streets a final lick of paint on Sunday, and many expressed hope the everyday difficulty of their lives would change.

“The expectation of the people and the country is all up to him (Weah). Everybody believes that if he fails us, the majority will be disappointed with politics,” he added.