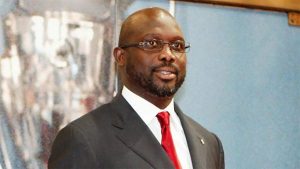 Former President of Nigeria, Olusegun Obasanjo has arrived in Monrovia, Liberia, for the swearing in of President-elect, Mr. George Weah.

Obasanjo’s plane touched down at the Roberts International Airport at 8:01 a.m. (9 a.m.) Nigerian time to attend the inauguration taking place later on Monday.

On hand to receive him were the Nigerian Ambassador to Liberia, Mr James Dimka; Force Commander for the United Nations Mission in Liberia , Maj.-Gen. Salihu Uba, among other officials.

Speaking to newsmen Obasanjo said he was a proud man to witness a peaceful democratic transfer of power in Liberia considering the huge sacrifices made by Nigeria for peace and stability in the country.

“I am very happy over what is happening in Liberia today and I congratulate my brothers and sisters in this great country,” he said.

The former ace footballer George Weah will be sworn in as Liberia’s President on Monday after defeating the country’s Vice President in a re-run election.

According to local media, 66 out of the 73 elected lawmakers were certificated, leaving out seven who are facing legal challenges over their election in the Oct. 10 general polls.

The final tallies of the re-run election indicate that Weah of CDC polled a total of 722,185 votes representing 61.5 per cent, while Vice President Joseph Boakai of the Unity Party (UP) finished with 457,579 or 28.5 per cent.

The president-elect, George Weah, described his election as a unifying factor in the country. He will take over from President -Ellen-Johnson-Sirleaf.