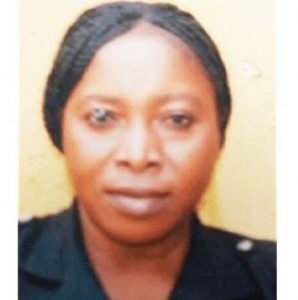 It was a sad day for the Lagos State Police Command, after a 35-year-old policewoman, identified as Sergeant Mariam Sule, died after fighting a woman suspected to be the mistress of her husband, Uche Madumere.

According to reports, the incident occurred on November 20, about 10p.m., at Number 10, Sholake Street, Iju-Ishaga, Lagos.

Trouble started when one Egnes started visiting Uche whenever Mariam goes to work. One of Mariam’s brothers, Kelvin Ndu, said: “Uche told me that the quarrel between him and Mariam started after a woman brought food to him.”

Uche however, said that he didn’t have food to eat at home, which was why he called Egnes to bring food to the house for him and his daughter to eat.

Uche said that when Egnes brought the food; he was seated outside. He told her to take the food into the house. According to Uche, shortly after, he heard screaming. He rushed to his apartment and met his wife fighting with Egnes. .

Ndu added: “Uche said when he rushed in; he met the door to the sitting room locked. He said he forced it open and asked his wife what was the problem? According to him, Mariam asked him why he brought the woman home knowing she was at home. .

Uche said he separated them and Egnes escaped, but Mariam ran after her and then later returned and went into her room, while he stayed outside. According to him, a few minutes later, his daughter, who was in her room when they were fighting, rushed out to inform him that ‘Aunty’ had fainted. .

Uche said he rushed back into the room and found Mariam on the floor. He claimed to have poured water on her and took her to Ifako General Hospital where he was told he brought her to the hospital dead.”

The Lagos state Police Public Relations Officer (PPRO), a Superintendent of Police (SP), Chike Oti, confirmed the incident and revealed that Egnes is under investigation.