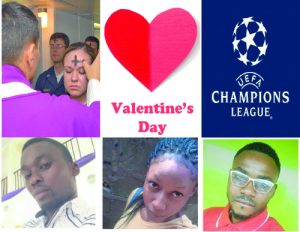 Not since 1945 did a Valentine’s Day falls on Ash Wednesday. That makes February 14, 2018, a historic day. However, 2018 is set to surpass 1945 for one reason: soccer. This February 14, stellar players of soccer will clash in a UEFA Champions League fixture extraordinaire, thereby making the day one of the most important in the annals of football.

Consequently, this year’s Feb 14 is a day clothed in three robes: piety, passion and love.

Typically an average Christian is caught in a web of piety for the Lenten period, the romantic lovey-dovey of Val’s day and the effervescence of UCL football.

In the thrust and turmoil of conflicting interests and competing loyalties, religious fervour and romance can hardly diminish the angst of soccer, not when the biggest names in football history–Ronaldo and Neymar–are on the evening’s menu.

Therein lies the day’s big question. How will men spend their evening, in a candle-lit restaurant, or in an adrenaline-pumping atmosphere of viewing centres?

Saturday Sun sampled opinions of Nigerians on how they plan to spend the day.

Expectedly, most Catholics declared they are going to church in the morning and noon to receive the sign of Ash Wednesday to remind them that “from ash we are and unto ash we shall return.”

Few respondents, however, cannot guarantee they are going to keep the rest of the obligations of Ash Wednesday–fasting, abstaining from eating meat and being chaste.

For non-Catholic Christians who abide by the rites of Ash Wednesday, the dominant opinion was that circumstances will not allow them to fulfill the obligations attached to the day, arguing that it will be awkward to be sober on a day one is expected to show love, make merry and bask in the euphoria of the Champions League.

A telecom worker, Yusuf Yomi has only one goal on that day. “To watch how Madrid is going to escape the claws of PSG, [and] If Neymar is going to prove his worth to be the world-best footballer.” For him, nothing else matters.

He explained how showing his fiancé love has to be an alternative forgone. “She has always known that I am a football person. She does not disturb my game days, the same way I don’t disturb her girls’ day. It is an understanding that we have had.”

He cited a more pragmatic rationale. “There is not much time to hang out after work and I am expected to resume 8 am the next day. So, there is hardly time for some romantic outing.”

He claimed, however, to compensate his woman by making himself available at the weekend. “Madrid v PSG is a sort of fixture for final. There is no way any genuine football lover will miss it,” he reasoned.

Samuel Enuka is not a football fan. His best movie is Titanic and he is a hopeless romantic who likes the rituals of love.

Yet, football is going to carry the day simply because the majority of his co-workers and cohorts would be watching the Champions League and he is trying to conform to the group’s norm. The fixtures have already become the talk of the town and talking points in his office on Victoria Island. Already male colleagues in the office had a tacit consensus to shun Val activities.

“I cannot miss that game because of my guys,” he explained. “They are already making plans as to where to watch the game together and thereafter sleep at the hotel and resume work the next day, rather than coming home and missing the game. My boss is supporting us,” he stated.

He outlined his plan for the day. “Fasting is from 6 am to 6 pm. I cannot do beyond 3 pm. I’d reduce my intake of food and alcohol, which is also a type of fast. Obviously, there is no woman for me. We have been “doing it” for two years now officially. When I break my fast by 3 pm, I can drink my alcohol with my guys in the evening,” he stated.

For Michael Okonkwo, a businessman, his day is going to be a little different. Ash Wednesday takes precedence.

“On the day, I will do the needful–go to mass and go to work. I don’t immerse myself too deeply in sports, but I am a fan of Real Madrid. However, Valentine will take a back seat,” he affirmed.

Bunmi Layeni, a banker, claimed that he and his girlfriend Nike will not be celebrating Valentine because, for them, every day is Valentine. “It has been like this with us since we were in school. We do not see anything special in it since we celebrate love always”.

Chike Okorie who works with a private company in Apapa is a Catholic and a football fan and he is married with two children.

His words: “I don’t even know the one I would choose because they all clocked together. However, I will set out by going to work, which is paramount.

“As a Catholic, I will also observe Ash Wednesday. Again, since it is a holy day, I will endeavour to go by the rules so that I will be closer to God. I will avoid eating meat on that day because it is my Catholic faith. I am a sports lover so I will watch Madrid and PSG match.”

Not a word about Val.

Most males are going to give the day to football. That is a fair assessment. However, there is also a group who simply would not allow romantic love to be trampled upon by the love for soccer. This group has a compromise that entails “killing two birds with one stone.”

Their game plan is to lure loved ones to joints where they can watch the Champions League while at the same time hangout for Val’s Day.

One of them is Chima, a tricycle operator who plies the Cele-Lawanson route. He sees no reason to miss out on any of the events of the day.

“In the morning, I will go to church, and then head to work. During a work break, I will call my baby and make plans with her. I will not let her know that there are big games holding on that day, I am going to take her somewhere I can watch the game,” he stated.

Most women knew a lost battle when they see one, and competing with football for their men’s attention is the easiest example.

Pearl Ajemo, a 25-year-old employee of Access Bank, has a theory that “men have since found a perfect excuse to run away from expenses.”

She recalled her fiancée jokingly calling her attention to this year’s Valentine’s Day. Pearl believes that men who might not be short on cash will either use the games as an excuse or observe the Ash Wednesday.

“Like my guy, our men are most happy when they have legit excuse to spend less. I am going to allow him to have the day to himself and not pester him for the Valentine, not because I am nice, but because my birthday is eight days after Valentine. That money he will still have to spend it,” she stated.

Pearl was not alone in her opinion. Ten other ladies’ views aligned with hers.

One of them, Nneka, interviewed while shopping along Okota Road, said: “Some guys who have not been to church this year will use it as an excuse to avoid responsibility.”

There are women too who had contrary opinions, who believe men have other things that make them happy which includes football and when such clash with other things unless it is emergency or family matters, that other thing takes the bench.

This is the nub of Adaobi Eze’s opinion: “After God and family, football is the next thing for my husband.”

She said further: “I am very sure of what is going to happen on that day. He [her husband] will take us to church and do school runs before he will set out to work; he will watch the game outside because he will not enjoy it at home. I might want to watch Zee World. It is on his return that he would come home with goodies for the Valentine’s Day. There is no way I am seeing my husband home before the end of the games.”

When Saturday Sun approached Rev. Richard Nnanna for his viewpoint, the cleric said that for every Catholic, Ash Wednesday is a day they can’t afford to miss, a day whose obligation must be met completely.

“It is important to remember that Ash Wednesday is a day of penitential prayer and fasting,” said he. “Some faithful take the rest of the day off work and remain home.”

He declared in no uncertain terms: “It is generally inappropriate to dine out, to shop, or to go about in public after receiving the ashes. Feasting is highly inappropriate. Small children, the elderly and sick are exempt from this observance.”

Whatever anyone is doing on that day, advised Rev. Nnanna, “one needs to be careful.”

Most Rev. Robert J. Baker, Bishop of Birmingham in Alabama in an Ex-Cathedra statement dated January 29, has addressed whatever grey area is still left.

For instance, those who wondered whether a dispensation (exception from a rule) from the standard laws of fast and abstinence would be granted, the bishop has been forthright: “Out of respect for the importance of Ash Wednesday in the lives of so many – including our non-Catholic brethren – and the way this custom underlines the importance of the Lenten season at its outset, a dispensation will not be given.”

To those who wish to celebrate Valentine’s Day, the Bishop Baker epistle says, they “may fittingly do so a day before (Mardi Gras) or on another non-penitential day.”

He concludes with a homily for Christians: “The good Lord, who suffered so much out of love for us, will surely reward our fidelity and sacrifice.”

Reading between the lines, the message is clear: No Valentine’s Day on Ash Wednesday.