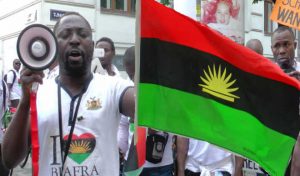 The Movement for the Actualisation of the Sovereign States of Biafra (MASSOB) on Thursday defeated the  Ohanaeze Youth Council 2-1 in a novelty football match at Umunze, Orumba in Anambra State in honour of Alex Ekwueme, who will be buried on Friday.

The leader of MASSOB, Uchenna Madu in a statement commended the former vice-president for his contribution to national devlopement

He said, “Ekwueme was an institution of learning, emulation and social justice. Though the Federal Government is hypocritically paying him last respects with the spirit of camouflage, we will never forget him.”

OYC leader Okechukwu Isiguzoro said, “OYC is happy with the novelty match between MASSOB representing Biafra and Ohaneze youths representing Nigeria in honour of our great leader and statesman, even though we lost narrowly to the Biafrans, it was a brotherly match.

” We accept it as a no victor, no vanquished affair. The most important thing is that the late Ekwueme remains the symbol of democracy in Nigeria and anything done to honour him is worthy of his respect as part of the funeral rites according to Igbo traditions.”