Information Nigeriahttp://www.informationnigeria.org
Information Nigeria is Nigeria's No.1 Information Portal.
There is currently chaos and pandemonium in Benin, the Edo State capital, following the killing of a bus driver by an official of the Nigerian Police. 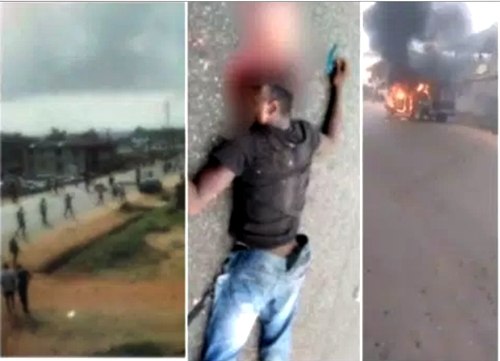 The victim and the police van set ablaze

Following the death of a bus driver who was reportedly killed by a Policeman from the Edo State Police Command, outrage and pandemonium has erupted in the state’s capital.

According to multiple online reports, the driver who was set to wed next week, was pushed by the Policeman into the path of an oncoming trailer which smashed his head this morning at the Murtala Muhammed way in Benin.

The deceased’s fiancée who confirmed the report, disclosed that the incident occurred after her fiance refused giving the policeman N100, after their bus was stopped, adding that their pleas was refused by the policeman, which led to an argument where the driver met his untimely death.

As a result of the resident, residents of the area angrily set some police vans on fire.

Outrage as policeman kills driver set to wed next week, over N100 . . There is currently chaos in Benin, Edo State, following the killing of a bus driver by a policeman. . . According to eyewitness reports, the incident happened, this morning, at M.M. Way, Benin. It was gathered that the police officer pushed the driver into the path of an oncoming trailer which smashed his head. . . According to the deceased fiancée, troubled started over the refusal of her fiancé to give the said policeman, N100, after their bus was stopped. She all their pleas was refused by the policeman. . . As the argument went on, she said the deceased was pushed and landed in the path of an oncoming trailer. Some police vans have already been set ablaze by aggrieved residents of the area.