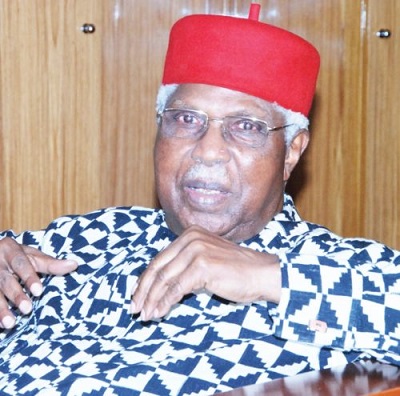 Vice President, Yemi Osinbajo conveyed the directive of President Muhammadu Buhari while delivering a speech at the funeral service held for the late statesman in Oko, Anambra state.

According to Osinbajo, the decision to rename the school was a way of immortalizing the late architect who has been describes by many as humility personified.

The funeral service was attended by past presidents and vice presidents, serving governors, lawmakers, very prominent politicians and statesmen.

As at the time of this report, a procession was being led for the final internment of the late statesman.

Ekwueme died at the age of 85 at a London hospital where he was flown to after he took ill and slumped.

Ekwueme who was Vice President to President Shehu Shagari was ousted in a coup staged by military officers led by  Brigadier  Muhammadu Buhari on 31 December 1983.

He is the Ide of the Oko kingdom in Anambra State, where his younger brother, Lazarus, is the traditional ruler.

He was also honoured by the council of Traditional Rulers in the old Aguata as the Ide of Aguata Local Government Area of Anambra State comprising forty-four (44) towns.

Ekwueme is a distinguished architect who started his professional career as an Assistant Architect with a Seattle-based firm, Leo A. Daly and Associates, and also with the London-based firm Nickson and Partners.

He is currently being accorded the full compliments of a state burial.