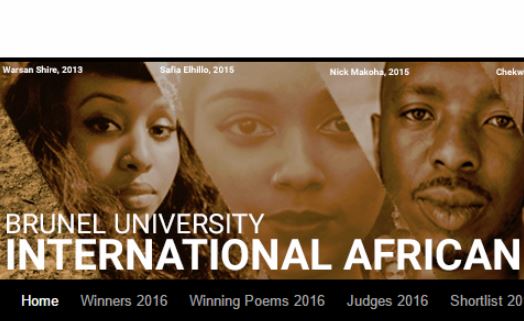 Over the years, I had thought that Brunel International African poetry prize was meant to project African voices in their raw awesomeness no matter which part of the world you live, without discrimination so far as you are African and the poems meet the required standard.

But, events of the past few days have convinced me to believe that Brunel is a pseudo-African platform commercialised by blacks living in diaspora with a twisted view to ridicule, re-colonise and downgrade African writers domiciled in Africa.

If a poetry competition as Brunel (I had rated as impressive) stoops so low as to shortlist poems for its poetry prize not on the basis of excellence but who has had “access to a creative writing education and a literature development culture outside of the continent, especially in the US and UK”, according to a statement by its founder, British-Nigerian writer Bernardino Evaristo, then African poetry is dead on arrival.

The popularization of the whacked mentality by Evaristo and to an extent, her judges that the so-called Africans exposed to creative writing education and literature development culture outside of the continent, especially in the US and UK are better off is not just a delirious thinking pattern but also an insult to all Africans living in Africa who have not left the continent before.

What it means in a layman’s language is that a majority of African writers who are talented will be ignored for the fact that they are not privileged to have access to creative writing education abroad – they are considered inferior to their counterparts abroad. Those who live abroad and exposed to the ‘almighty creative writing education’ bla bla bla are chosen over their contemporaries who live in Africa.

And that is exactly what happened this year.

6 of the poets shortlisted this year do not live in Africa (and may never have stepped foot in the continent). For the remaining two: one lives in Cairo and studied at the University of Mississippi (she’s got the abroad connection), while the other is a Nigerian (chosen obviously to save face).

This toxic reasoning introduced by the organisers who should know better might set off a catastrophic precedent for the future. When discrimination is spelt out openly in this fashion without remorse, it is a clarion call for all those living in Africa who have ‘sense’ to count their teeth with their tongues as you are now considered as second class contestants.

Evaristo has made it clear that Brunel is to big for African poets living in Africa as they are considered ‘not good enough’.

Even if Brunel has now become a UK/US affair as the organisers want to make it seem, the transition should’ve taken a gradual process.

Moreover, this new trend will spell doom for the future of African literature as those given the mantle to represent Africa are nothing but pretenders who do not carry the conscience of Africa. This favouritism is unacceptable.

Betterstill, the organisers should create a competition only for people living in Africa, as this will see to it that African talents are given the recognition they deserve.

How do you call this ‘Brunel International African poetry prize’ and yet expect people who do not live or probably have not been to Africa before to tell the story of Africa (after reading books and watching movies innit?) from UK and US after muting the original voices of those who live in Africa? That is preposterous!

The name should be rightly changed to ‘Brunel International poetry prize for Africans Living Abroad’ to reflect its new role.

Again, how convenient was it for the organisers to have shortlisted 6 women for this year’s prize? Out of all the thousands of applicants, only two men were considered worthy to be shortlisted. The gender bias showed by organisers of this poetry prize is a shameful attempt to favour a gender over another which no reasonable person can take.

Such discriminatory and unfair practice should have no place in a competition of this standard in this day and time. If the table was to be turned, everyone would have run mad by now.

My advice to African poets living in Africa concerning Brunel is this: please stop wasting your time applying for Brunel poetry competition because you are seen as inferior just because you have not attended any creative writing education outside Africa.

Unless you know the judges or have someone within to fight your battle, then don’t waste your time waiting for a Brunel miracle no matter how good you are. Well, if you think otherwise, goodluck to you.

If you have not traveled/studied outside of Africa, you are mostly considered incompetent and incapable of writing poetry to meet their standard. Of course that insinuation is dumb because many poets I know here are in a different class far above the writers of some of the tasteless poems shortlisted this year.

Evaristo owes all Africans in Africa an unreserved apology for the ludicrous, ill-informed and discriminatory statement (you can visit the Brunel page to read her full statement). If this issue is not addressed and apology tendered, I will write a protest letter to the Commonwealth Foundation for sponsoring such a dishonourably shameful campaign.

May we all be successful.