How a Facebook user was scammed of N1000 at Victoria Island 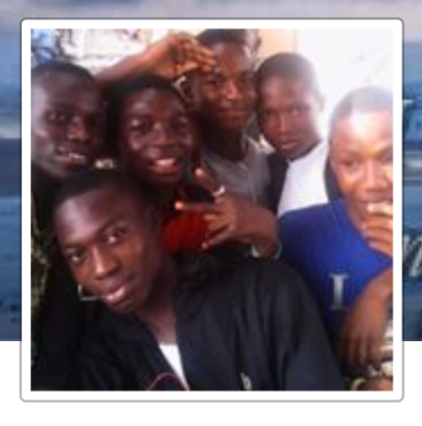 A Facebook user identified as Presh Arthur has narrated how he was scammed of N1000 in Lagos.

A Facebook user identified as Presh Arthur has narrated how he was scammed of N1000 in Lagos. According to him, he boarded a public vehicle where he met with a man who wanted to pay for the transport with US Dollars. The man claimed to have been sent to Nigeria from Singapore for business. To make payment for the transportation, the man offered the bus conductor a $100 note.

Noticing that the man was paying too much for something that shouldn’t cost much, Presh had to call his attention to the fact that a $100 note is big money when converted to Nigerian Naira. However, the man claimed he didn’t have any other money for payment that’s why he wanted to drop the $100 as he was in a hurry to the French Embassy.

The driver of the vehicle, whom he later realized was an accomplice to the scam, told him Presh that if he has N1000 he should give it to the man in exchange for the $100 note which is actually N36, 000 when converted to Nigerian currency. Read what happened afterwards…

”How I Was Scam Today At Victoria Island.
Nigeria will always look for a way to make sure their 3 square meal is available.

At ahmadu bello way going to STV / Rhythym 93.7fm for a business stuff like that, i board a bus from Odeku Victoria Island, So they is this man who also enter the bus and claim to be working in ship, sent to nigeria from singapore for a business after dropping $100 as payment for the bus instead of #100.

To cut the story short, the driver who claim to be innocent and i try telling the man that $100 here in nigeria is a big money that he should go for exchange of currency at eko hotel.
At the end of the story, the driver told me that if i have #1000 i should take the $100 as exchanged since the man is on his way to french embassy.
After all, i agreed and take the $100 and finally discover that the $100 is fake and have been fraud by the 2 idiot when i reach Gbagada With just #50 – when aboki told me to hide the $100 that is fake. 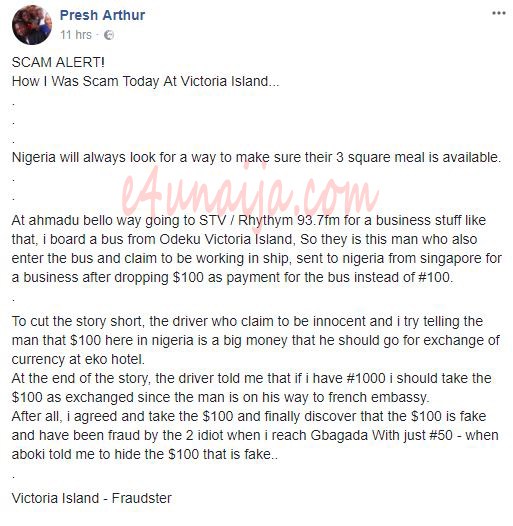