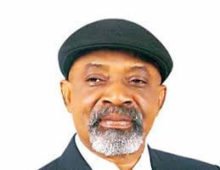 The minister of Labour and Employment, Dr.  Chris Ngige has raised alarm stating that N30 billion is missing from the Nigeria Social Insurance Trust Fund (NSITF), according to LeadershipNG.

This comes after the minister inaugurated other boards but failed to inaugurate the NSITF board which is under the Ministry of Labour. The boards inaugurated by the minister include those of the National Productivity Centre (NPC), National Directorate of Employment (NDE), and Michael Imoudu National institute for Labour Studies (MINILS).

Giving reasons why the board was not inaugurated alongside others yesterday,  Ngige said he had the consent of the president to stay action on inaugurating the NSITF board the pending the outcome of the administrative enquiry recently set up by the ministry to investigate the mindless looting of the agency.

The minister urged members of the other boards so inaugurated to be accountable in the discharge of their mandates to avoid a repeat of the rot in the NSITF.

Ngige said: “The operations of the various parastatals must strictly conform to financial regulations, especially Section 32 and the provisions of the Procurement Act. The audited accounts of the parastatals must always be prepared and submitted to the relevant authorities as and when due.

“The NSITF, for example, is reeling from massive looting with no audited account for five years. A whooping sum of N5billion was unearthed by an audit panel of enquiry as having been taken out of the NSITF coffers with First Bank in a single day without vouchers.

“Worse still, the organisation maintained no cash book as required by financial regulations. This resulted in massive looting of funds by board members acting in concert with the management staff.

“When we say N5 billion was taken in one day, that’s not the only amount missing. Over N30billion cannot be accounted for and the members of the past board participated actively in the looting.  We want to know how board members, who are not part of the management, found their way so deep to have participated in plundering of the agency,” Ngige said.

The labour minister revealed that some indicted management staff and members of the previous board, including their chairman, had been charged to court by the Economic and Financial Crimes Commission (EFCC).

“We don’t want the new board to go into a stench; putting a new wine in an old wine skin, it will be polluted. That’s why the president agreed for us to do an administrative enquiry there to explain the total failure of the internal audit mechanism for checking that no money leaves the establishment without voucher, and in this instance, over N30 billion missing and N5 billion of it without any voucher, no trace. It is unacceptable,” he stated.

Ngige asserted that having discovered that the former board was neck deep in massive corruption, it was imperative to forestall recurrence. He, therefore, said that once the panel of enquiry concluded its findings and government issued a gazette on its conclusions, a new board would be inaugurated.

“We will make sure that people who are going there will be people of character and quality so that such a thing will never happen again because the NSITF is the flagship board of this ministry and for the constituent tripartite organisations,” he said.