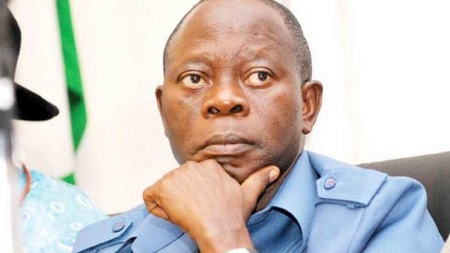 Oshiomhole had recently threatened to expel Minister of Labour and Employment, Dr Chris Ngige from the party if he fails to inaugurate the board members of federal agencies and parastatals under his ministry.

The topic have since become a hot one among Nigerians on social media as they drop their two cents.

Me: Oshio is on the part to killing APC finally!

The hypocrisy in this is that Oshiomhole is quiet on Kemi Adeosun, yet roars like a lion on other Ministers. Is Kemi Adeosun not a Minister in this government? Why isn't there a word from him in his capacity? https://t.co/ls0IVpiX0c

What Oshiomhole is doing is actually good for his party. Had he been chairman all this while, the APC wouldn’t have been doing this bad.

Clearly Oshiomhole doesn't know Ngige well enough, it's about to go down. The unholy alliance that's APC is about to implode get your popcorn and soda ready and sit tight, it'll be an interesting movie…

Oshiomhole needs to pinch himself. This is not the Nigeria Labour Congress….Anyway, APC has never deviated into civility!