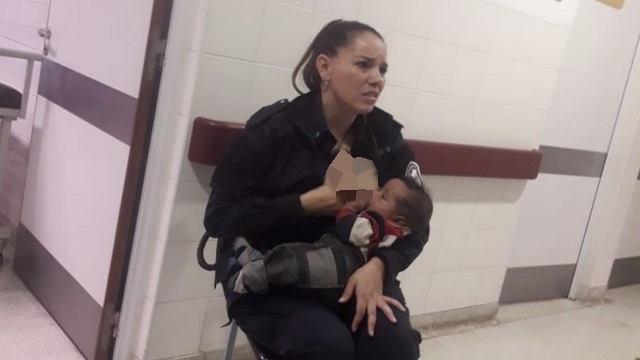 A police officer in Argentina, Celeste Ayala has been promoted after a photo of her breast-feeding a neglected baby while in uniform went viral.

The New York Times reported that Ayala was among of team of police officers that took six siblings into state custody in a city near Buenos Aires earlier this month because they were in extremely poor condition.

The youngest sibling, who was about seventh months old, continued to cry, which was when Ayala asked staff at the hospital if she could breast-feed the baby.

“I didn’t doubt it for a second,” Ayala, who has been breast-feeding her own daughter, told the Argentine television show “Cronica.” “So I pulled out my breast and he became calm.”

A photo posted on Facebook of Ayala breast-feeding the neglected baby quickly went viral. As of Thursday evening, the post had more than 113,000 shares on the social media platform, reported The Hill newspaper

“I want to make public this great gesture of love you had with this baby, whom you treated like a mother without a second thought, even though you didn’t know him,” Marcos Heredia, a colleague of Ayala, wrote on Facebook.

The minister of security for the Province of Buenos Aires told Ayala that she would be promoted to sergeant last week, The Times reported.