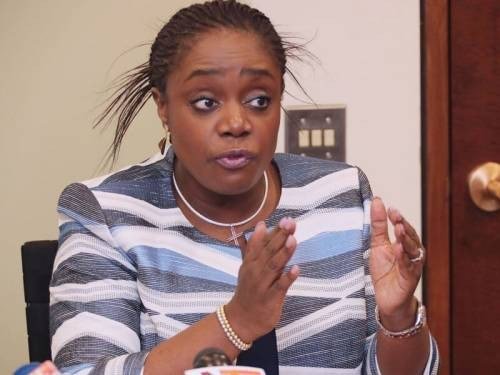 Nigerians were thrown into shock after news broke that Minister of Finance, Kemi Adeosun, has resigned from her position.

Sources quoted her as saying, she had to go because the alleged forgery of her National Youth Service Corps Certificate made her position as Minister untenable.

Many Nigerians have hailed the former minister for taking the path of honour and resigning while others are saying resigning isn’t enough. Many have taken to social media to ask that she be prosecuted by the appropriate authorities according to the rule of law.

With Kemi Adeosun’s reported resignation, it’s safe to declare that Nigeria’s journalist of the year is definitely our own @abdulfagge, for revealing her forgery and how she was being exploited by NASS. And allow me to famz that he’s my former co-worker. #ProudFriendsCommunity 😀

Kemi Adeosun was mute for too long over the NYSC saga. However, for her to have resigned as Minister of Finance shows that she's sane.

FLASH: I have just received news that Kemi Adeosun, @HMKemiAdeosun has resigned.

If truly she has resigned, she must refund all the salary she has received serving as minister of finance with forged certificate.

Thanks PMB For Not Sacking Kemi Adeosun. Loyalty in Politics is Everything. Go Well Kemi, You Can, Saw & Made us Proud.

Kemi Adeosun's resignation have rubbished Itse Sagay SANship! She thread the path of honour when those who are supposed to know better want to legalise illegality!

Kemi Adeosun have my respect!👏

ME : The best time to quit the stage is when the ovation is loudest.

Thanks for bin courageous enough @HMKemiAdeosun

Professor Itse Sagay should 'resign' too. He justified the crime of forgery committed by Kemi Adeosun and claimed that the Oluwole Minister of Finance was too indispensable to be sacked. He should hide his face in shame!

As Kemi Adeosun resigns , ICPC and other relevant agencies should prosecute her for forgery without further delay; only then can we say kudos to this admin that is known for giving soft landing to corrupt friends and family. Babachir Lawal is Adamawa Campaign DG.

Kemi Adeosun’s rumoured resignation is a smokescreen and we should be wary of “progressive characters and their boys” who’ll use this occasion to sweep her alleged criminal actions under the rug. Resigning has no place under the rule of law but arrest and prosecution does.

Share
Facebook
Twitter
WhatsApp
Previous articleBreaking!!! Kemi Adeosun resigns as Minister of Finance
Next articleOsinbajo narrates political journey, says he was in the scene for a long time before he aspired for office
- Advertisement -Ad ==> Discover how a young Nigerian graduate now makes a consistent 40k per week doing a legitimate online business. You too can start yours now, click here!!!

The new governor of Bayelsa state, Douye Diri has described himself as a 'miracle governor' following the manner in which he emerged governor of...
Read more
- Advertisement -