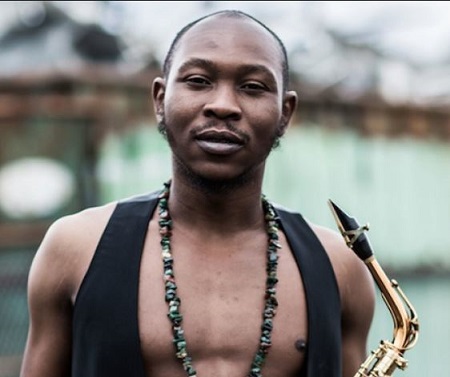 Disaster was quickly averted on Wednesday night, the third day of Felabration 2018, at the VIP/Artiste lounge of the New Afrikan Shrine, when Seun Kuti lost his temper over a staff of the Shrine who disrespected him.

Seun who arrived at the Shrine in the company of a few associates was all shades of good mood but lost his cool when a security guard who later told Showtime that he didn’t recognize Seun, attempted to walk him out because the lounge was strictly for VIPs and artistes.

Obviously shocked that a security guard at the Shrine would treat him like a regular person, Seun angrily slapped and bullied the helpless security guard who was quick to apologize for his mistake.

When Showtime asked why he treated Seun the way he did, the security guard whose facial expression reeked of regret and pain from the slap Seun gave him, said; “Honestly I did not know that it was Seun Kuti because I do not recognize him. I was only trying to do my job by asking blocking him from entering. I didn’t mean to disrespect him or cause a scene out of my actions.”