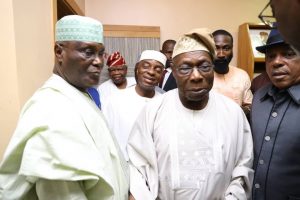 The endorsement has sparked a hive of reactions amongst many Nigerians, as they have expressed their surprise at the U- turn by the former president to support Atiku, whom he had vehemently refused to have anything to do with, in the past.

Obasanjo, in the past, had said that there was no way he would ever support Atiku to rule Nigeria. He also released some unfavorable statement against the People’s Democratic Party (PDP) presidential candidate.

However,it is important to noted that the former president has long withdrawn his support from president Muhammadu Buhari, whom has written series of letters to, telling him(Buhari) that he has failed as a President.

See reactions below from Nigerians

If Obasanjo likes, he can endorse Atiku, if he likes he can endorse Buhari, even Oby if he so desires.
Question is very simple, can OBJ deliver his Abeokuta Polling Unit? At this point, the answer is no.

Obasanjo endorsed Buhari in 2014 and he was praised to high heavens. Today, some are trying very hard to rubbish Obasanjo's endorsement of Atiku with "he does not have any political clout." When fire burns the Devil, he speaks in many languages.

Those always quoting Obasanjo to ridicule Atiku, see why you must join big’s men fight with your brains intact. No matter how messy it gets among our elite, they’re one. Insult Atiku to promote Buhari as much as you want, but Atiku is more dear to Buhari than your entire family. https://t.co/iKMA8KMkx3

Today only shows Obasanjo's fear of Buhari outweighs his hate for Atiku. The old fox doesn't surprise me one bit.

Having said that, Obasanjo or not, I am strongly of the opinion that we have passed that stage where a few so called elders will decide how Nigeria should be run. 2019 will be the final nail on that coffin, God willing