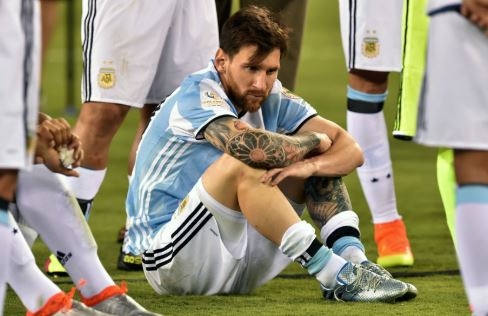 Diego Maradona has reiterated his call for Lionel Messi to turn his back on the Argentina national team after being let down by team-mates such as Javier Mascherano and “traitors” within the FA.
The Barcelona superstar is currently weighing up his international options on the back of a disappointing 2018 World Cup campaign.
He has ruled himself out of contention for current selections, with interim coach Lionel Scaloni being forced to call upon others as the No. 10 jersey is rested alongside a talismanic figure.
Messi has offered no indication as what his future plans will be, after earning 128 caps to date, but an iconic countryman has urged him to remain in exile.
Maradona believes the 31-year-old forward lacks the full support of those around him, with colleagues and administrators failing to divert unfair criticism away from a man who often has to shoulder the expectations of a nation by himself.
The 1986 World Cup winner told Infobae: “That’s why I am telling him not to come back and take all of the blame.
“We will mourn him because there is no other player like him, but just as Messi falls, so does the AFA.”
Maradona added, with former Barcelona star Mascherano singled out as a senior figure who should have done more to defend those around him in Russia:
“It is very easy to say that Messi is to blame, but they are going to kill the kid.
“And this kills me because if there are comrades who really love Messi, they should have come out and defended him, not press silence.
“I was wrong about Mascherano, I thought he was a leader. Today, I have to say that Mascherano is not what I believed, but that mistake is totally mine, not his.”
Maradona has previously claimed that he would be willing to return for a second spell as coach of the Argentine national side, with it even suggested that he would fill such a role without pay.
He has, however, backtracked on that stance, with there no longer a desire on the part of a man now working with Mexican side Dorados to join forces with those at the AFA.
“I won’t return,” said Maradona.
“I’m really looking forward to doing a lot of things here and in the national team there are a whole bunch of traitors, so I’m not going back.
“We wanted a new AFA and we got [Claudio] Tapia. I’m guilty in that as well. He came to ask for support and I said yes.
“He told me a lot of things and then did nothing, he did not call me anymore. That’s betrayal and I spit in the face of traitors.”