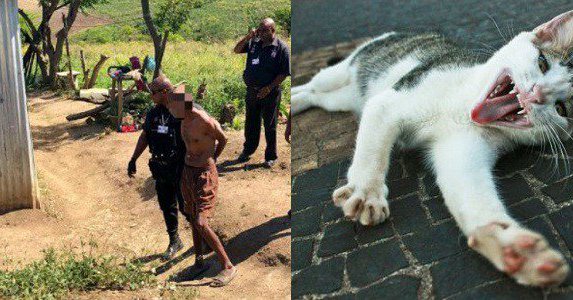 A South African man from Verulam, KwaZulu-Natal was arrested on Friday for alleged bestiality after his neighbour caught him penetrating her pet cat.

Prem Balram‚ for security firm Reaction Unit South Africa‚ said that the man’s neighbour had raised the alarm after she caught the suspect fully naked while he was having sex with the cat.

“She informed the controller on duty that her neighbour was having sex with her pet cat.

“The woman had walked to his residence to investigate when she found the naked man holding the cat by rear legs and penetrating the animal‚” he said.

“The woman informed our officers that she wanted the man removed from the premises. Officers entered the home and found him dressing‚” he said.

In the statement made to Times Live, Balram added that the SPCA had been called to attend to the injured animal.

“The suspect was handed over to the South African Police‚” he said.