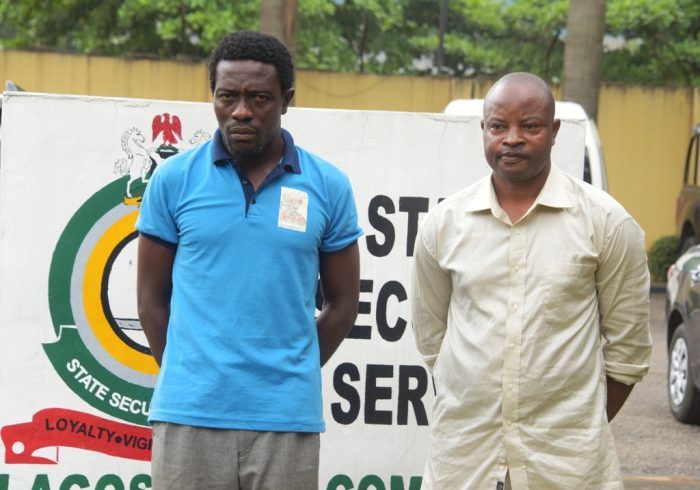 The Suspects, Idowu Ayeni (left) and Matthew Adedoyin (right), being paraded by Department of the State Security, Lagos State Command, on Monday

The Department of State Security (DSS) on Monday rescued an American citizen, Tawanda Lynn Jackson who was held hostage by one Mathew Adedoyin, her acquaintance whom she had met on social media.

Parading the prime suspect and his accomplice at the DSS Lagos Command, Director of the Command, Mrs. Betty Adoki, said Jackson, 46, who had arrived Lagos on Sunday, November 11 and was received at the airport by Adedoyin was held hostage on November 21, where she was allegedly raped several times by the suspect.

According to her, the American Embassy in Lagos had reported to the Command about Jackson’s abduction and that they immediately commenced investigation which culminated in the raid of the criminal hideout by a team of security operatives and Military personnel of the 9 Brigade, Nigeria Army, Lagos.

Adoki said the suspect had lured the black American mother of five through social media, purportedly for a visit, claiming to be a wealthy prince from Arogbatesu royal family of Ile-Ife, Osun State with the intention of extorting money from her.

She explained that while on the dating site, Adedoyin, 40, lied to the victim that he was an exporter of ginger and bitter cola, with a large plantation of cocoa and palm oil, claiming that he had a lot of slaves working for him.

“He said that his father was a former king of Ife Titun, Osun State and that he was heir apparent to the throne. He further cajoled the victim that he owns several buildings in Lagos, including where Jackson was held hostage. But the victim started to suspect a foul play when he was losing patience and said he rented the place meanwhile, it was a ramshackle place he said his father owned,” Adoki said.

She said Adedoyin, in furtherance to his deceit, was discovered to have reserved Protea Hotel, Ikeja, as accommodation for the victim while in Nigeria, but deliberately moved her to another hotel, in order to prevent the monitoring of Jackson by the Embassy, while he eventually seized her International Passport, credit card and United States Identity card of the victim in order to prevent her possible escape.

The suspected abductors received the victim at Murtala Mohammed International Airport (MMIA), Ikeja, Lagos on 11th November and promptly lodged her at Turn Up Hotel, Ipaja for three days before moving her to a prepared hideout in Abule Egba, where she was held hostage.

“Consequently, on November 26, 2018 about 0200hours, Jackson, was rescued from the captivity of these criminal elements who are suspected to be internet fraudsters and kidnappers. Jackson was held hostage at No. 7, Akanbi Street, Abule Egba, Ifako-Ijaiye LGA, Lagos by one Mathew Adedoyin and his accomplice, Idowu Ayeni,” Adoki said.

She said investigation would be intensified after which the suspects would be prosecuted in line with relevant laws.

Speaking to journalists while being paraded, Adedoyin, who claimed to be real estate agent, denied abducting the victim or raping her, saying that she asked him for sex, adding that her flying down to Nigeria was on her own volition with the intention of getting married to him.

He admitted that on her arrival to Lagos, he lodged her at Turn Up Hotel, but had to move her to his friend’s house for her to stay pending when he could raise money for her return ticket to the United States.

He also denied seizing the victim’s passport, saying that he only helped her keep it safe after he realised that she was carefree with her bag containing the documents anytime they went out.

His accomplice, Idowu Ayeni said he was uncomfortable when the suspect brought the victim to his house but had no concrete plans on when they intended to leave.

Ayeni, who said he works as a litigation officer with a law firm, denied having anything to do with the suspect’s plans, saying his involvement was letting them squat for a few days in his abode.