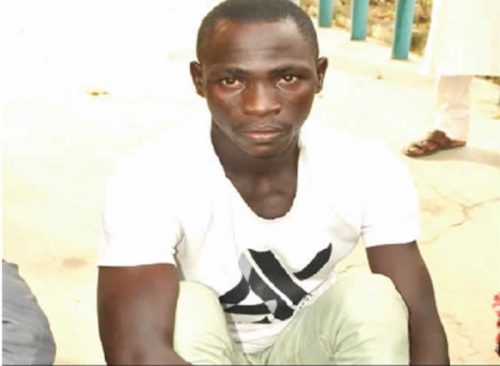 The Niger State Police Command has arrested a 35-year-old man with a human eyeball.

The suspect, Shuaibu Ibrahim, of Safiu village in Toto Local Government Area of Nasarawa State, told the police the eyeball was to be sold for N250,000.

According to a police report, the suspect was arrested in the early hours of Thursday by detectives attached to Gawu-Babangida Division in Gurara Local Government Area of Niger State, while on routine patrol.

It was learnt that the eyeball was removed from a victim during a communal clash between Igbira and Bassa people in Nasarawa State.

It was also learnt that one of Ibrahim’s accomplices, identified simply as Ojo, now at large, gave the eyeball to the suspect to sell in Niger State for N250,000 before he was nabbed.

The suspect, who said he’d been in the business for five years, said he was the intermediary between Ojo and the buyers of human parts, Punch writes.

“My duty is to deliver human parts given to me by Ojo to his clients across the northern states,” he said.

“We make quick money in this business but I cannot tell what the buyers are using it for. “A lot of people are interested in buying human parts. But honestly speaking, I don’t know what they use it for; my duty is to deliver as at when due to our clients and collect the money involved.”

Asked whether the buyers use the human parts for ritual purposes, Ibrahim said,

“They must be using it for something; frankly speaking I don’t know. My duty was to carry out the order of my boss (Ojo) to his clients. “I don’t even ask clients what they are using the human eyeballs to do, but I guess it must be for something serious.”

The state Public Relations Officer (PPRO), Muhammad Abubakar, said the matter would soon be charged to court after investigation.