Home News Feed See what doctors found in the belly of a woman they thought...
Facebook
Twitter
WhatsApp 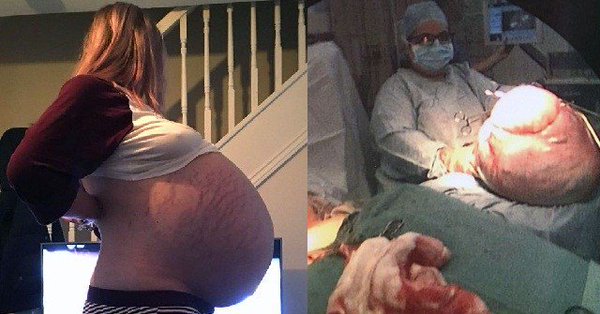 Doctors thought a woman was pregnant with multiple babies but several pregnancy tests came out negative, leaving her doctors confused.

Keely Favell’s big tummy made her go to the hospital for a test. When pregnancy tests had shown she was not expecting, she thought she was just piling on weight. But her bump kept growing bigger and made her return to the hospital several times.

After more pregnancy tests came back negative her GP who was still convinced a baby was the only explanation, referred her for an ultrasound scan. It was then that her enormous bump was revealed to be an ovarian cyst weighing more than four stone, the same weight as seven newborn babies.

Keely, 28, had a five-hour operation to remove the growth, which she nicknamed Mr Whippy.

I didn’t understand why until I came round and everyone was treating me like a minor celebrity. They explained how big this cyst was and showed me pictures – I couldn’t believe I’d been walking around carrying this medical alien.

It looked like a massive pile of ice cream so I called it Mr Whippy!