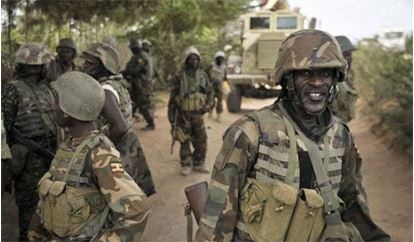 The Nigerian Army in a press conference on Tuesday narrated how the governor tried to bribe some of its personnel into rigging for Peoples Democratic Party (PDP).

Colonel Aminu Iliyasu of 6 Division revealed during the conference that the Rivers state governor tried to bribe the soldiers after he was caught with election materials.

Statement from the press conference

The period leading to the 23 February 2019 presidential and National Assembly elections witnessed a lot of political activities and manoeuvres by political actors, which is normal in a democracy. However, most worrisome and dangerous is the employment of political thugs by some desperate politicians to disrupt a legitimate national process for their pecuniary gains.

Equally of grave concern is the daring attempt by the Governor of Rivers State, Barrister Nyesom Ezenwo Wike, to compromise security agencies, particularly troops of 6 Division Nigerian Army, with hefty financial inducements to help him in his illegitimate act of thwarting a free and fair electoral process in his favour, while accusing the Nigerian Army and its command hierarchy of bias daily.

Apparently, Governor Wike must have underestimated the Nigerian Army’s commitment to being professionally responsive in the discharge of our constitutional roles.

The Chief of Army Staff (COAS), Lieutenant General Tukur Yusuf Buratai, has over time reiterated and demonstrated the Nigerian Army’s resolve to being apolitical, neutral and unbiased. He has also left no one in doubt of our total and absolute loyalty to the Constitution of the Federal Republic of Nigeria and the President Commander-in-Chief of the Armed Forces of the Federal Republic of Nigeria. Therefore, no amount of cheap blackmail and unsubstantiated allegations will make us bulge.

While we do not intend to join issues with anyone, however, it has become expedient to bring to the notice of the general public the actual reasons behind Governor Wike’s attrition against the Nigerian Army and its leadership with the hope that he will finally sheath his sword and publicly apologise to the Nigerian Army as we present to you the following shocking discoveries.

Gentlemen of the press, you recall that on Saturday, 15th February 2019, the eve of the now rescheduled presidential and NASS elections, one Barrister Emma Okah issued a statement alleging that a very senior officer of this command attempted to tamper with INEC sensitive materials at the CBN Port Harcourt premises. A rejoinder was immediately issued by HQ 6 Division, which not only rebutted the allegation but also demanded an apology from Emma Okah within 72 hours or faces legal action. As at this moment, Emma Okah has arrogantly refused to heed the advice.

Preliminary investigations discovered the sum of N2.25million only in a Range Rover belonging to the DSP. Other items recovered are four INEC 2019 electoral tags, customised Rivers State Government House brown envelopes, while the sum of N500,000 only, was found in the Toyota vehicle belonging to Major A.P. Ubah, which he confessed was given to him by the Governor’s aides in addition to the offer of a well-furnished accommodation for the period of his tour of duty.

Similarly, same day Saturday, 23rd February, 2019, at about 7am, a member of Rivers State House of Assembly, Honourable Opokri Wanaka, in company of Dr Reason Onya Williams, Rivers State Commissioner for Urban Development, visited own troops camp at Akinima and requested to be acquainted with the Commander of the troops at the location. Honourable Opokri offered the officer some amount of money he removed from his pocket, but the officer not only rejected the offer but sent the duo away.

Incidentally, while the officer and his men were manning a check-point at Mbiama Bridge, a white Hilux vehicle with Rivers State Government Reg No. L02-03 RV RIVERS and eight occupants were stopped for routine search and clearance. A carton and two bundles of INEC 2019 presidential election ballot papers were discovered in the vehicle. Preliminary investigation reveals that none of the occupants of the vehicle is an INEC staff, INEC Ad-hoc staff or security agent.

During the course of on-the-spot interrogations, Honourable Opokri Wanaka and Dr Reason Onya Williams, earlier mentioned above, appeared at the spot and tried to convince the suspecting troops that the vehicle is part of the INEC convoy that was left behind and that the vehicle should be allowed to go because the electorate is waiting. When the vigilant officer refused to be convinced, Dr Reason immediately placed a call to Governor Wike and His Excellency requested to speak with the officer, who declined and requested the Governor to please call the GOC. After much resistance, the officer gave Dr Reason his number to pass to Governor Wike, which he did via Whatsapp message. Within 10 minutes, Governor Wike placed a call to the officer.