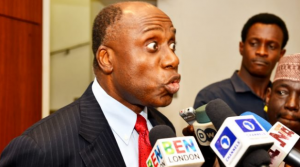 Peoples Democratic Party(PDP) vice presidential candidate in the last presidential poll, Peter Obi, has said minister for transportation, Rotimi Amaechi, lacks the competency to talk about the 2023 Presidency because he is no longer relevant politically.

Peter Obi who made this known In Portharcourt during a book launch in honour of Rivers State governor, Nyesom Wike, added that he didn’t even deliver for his party in his state, All Progressive Congress(APC) during the last presidential poll.

The former Governor added that is it Amaechi who couldn’t give his Party 25 percent votes in his state during the last Presidential poll that would make presidency comment for the Igbos???

His two reasons are summarized below: