Publisher of Aviation magazine, Dele Momodu, has fired back at a troll who accused him of never supporting a presidential candidate who has won election before.

Dele Momodu came all out blazing to narrate how he supported MKO Abiola, who the annulled presidential election in 1993.

Also Read: Photos: How all the “who’s who” of Nigerian music industry turned up for Patoranking yesterday

Nigeria’s next President in 2023? The race has started… Best wishes to one of Nigeria’s most influential politicians ASIWAJU BOLA AHMED TINUBU…

The troll identified as Olushola Olushola tweeted in response:

Dele has never supported a candidate that won election; MKO, Mahama of Ghana, Hillary Clinton of USA. I knew he was bad omen when he Joined Atiku’s team and was relieved when he was the first to shout ‘concede’

Not taking kindly to the comment,  the Aviation Magazine boss replied:

You see how myopic you are at your age… Did MKO not win in 1993? Is he not the father of Democracy in Nigeria today and June 12 not a public holiday in his name because he won? You look too intellectual to sound so illiterate, if this is your true picture!!! 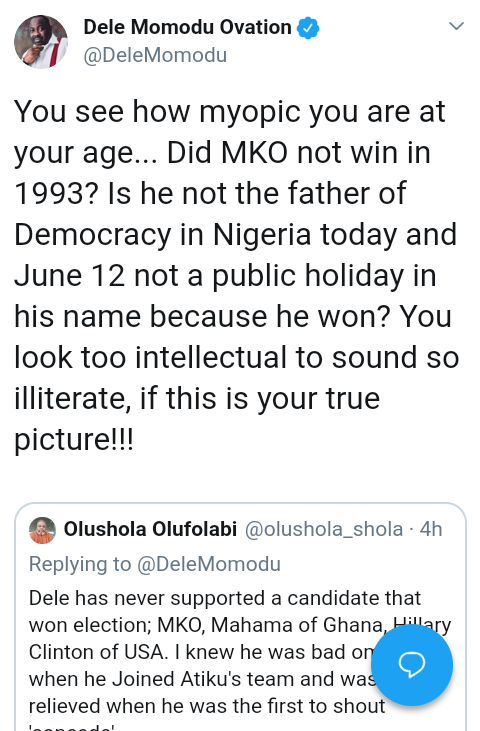