Anthony Joshua has reacted to his defeat to Andy Ruiz admitting that he was at fault over his loss at the 7th round of last night’s bout with the Mexican boxer. 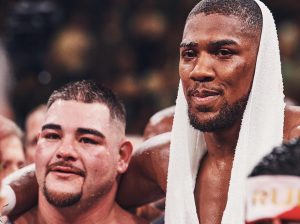 Joshua, who was defending his IBF, WBA and WBO titles, was knocked down four times before Ruiz was awarded a technical knockout.

Reacting after the match, Joshua said,

there’s no excuses. It’s my own fault. I got caught with a big shot. Congratulations to him. I would have preferred it to be Deontay Wilder, do you know what I mean? But it wasn’t. It was Andy Ruiz, and he deserves it, and the fame and fortune he’s about to receive.

“I don’t want anyone to kind of drown in their sorrows. This is boxing. It’s all the same. It just wasn’t my night. It was Andy Ruiz’s night. You know what? It’s good for the TV”.