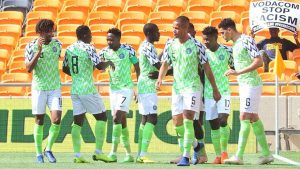 The Super Eagles of Nigeria failed to show up for the pre-match press conference ahead of their clash with Guinea tomorrow, June 26th. According to sources, they are said to be at loggerhead with the Nigeria Football Federation(NFF) over unpaid allowance and match bonuses.

They won their opening match of the continental showpiece after overcoming a stubborn Burundi side by a lone goal courtesy of Ighalo.