Not less than five persons have been confirmed dead from a ghastly auto crash that happened along Bauchi-Jos road on Saturday, 30th of June 2019. 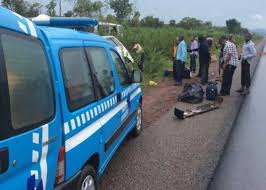 The Federal Safety Corps (FRSC), Bauchi state sector command in a briefing disclosed that a trailer and Peugeot car collided head-on collision leading to the death of five persons.

In a statement made by the spokesman he disclosed,

“The accident occurred when the 406, which was coming to Bauchi, tried to dodge a bad portion of the road but lost control and ran into the trailer which was heading to Jos and they had a head-on collision,” said Suleiman, describing what led up to the accident.

“And as a result, all the occupants of the 406, two female adults and three male adults, sustained severe injuries. Our men immediately rushed to the scene after receiving the information and rushed them to the Abubakar Tafawa Balewa University Teaching Hospital, Bauchi for medical attention. Unfortunately, they were confirmed dead on arrival by a medical doctor.”

“the trailer crushed the Peugeot and the Peugeot was under the trailer. We had to seek the services of two cranes and it took us several hours before we were able to separate the two vehicles.”