A Twitter user @bigdaddyonair has taken to the micro-blogging platform to share the story of his old colleague who got three of his colleagues pregnant before leaving the radio station for another one.

He added that the guy was married with three kids at the time.

I just heard a story of one of my old radio buds got three of his colleagues pregnant and left the radio station for another one! Nigga will go and get four more women pregnant at the new station.

And yo! He is married with three kids. Fam is a goat-like in goat the real village goat. 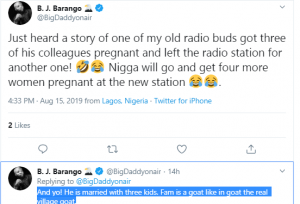