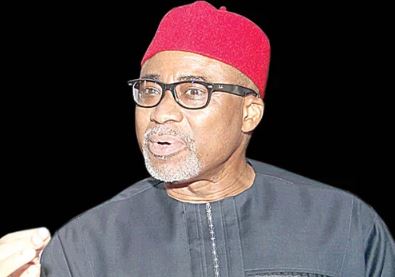 Abaribe, Abia South senatorial district senator had called on Buhari to resign over the worsening state of security in the country.

However, Nwankpa, while speaking with journalists in Isuochi, Umunneochi LGA, Abia State, said that the Senator had abandoned his constituents to abuse Buhari.

He said; “Senator Enyinnaya Harcourt Abaribe lacks the moral right to ask President Buhari to resign from office. Abaribe is suffering from diarrhoea of the mouth and does not know when to play politics and when to be serious on an important national issue.

“He should tell us what he has achieved as senator representing Abia South for 13 years now. There is no good road to his country home at Ohuru, Obingwa LGA. Abaribe should be the first person to resign because he has failed to perform as a senator. He has no constituency project for his constituents.

“The statement made by Abaribe is irresponsible, unacceptable and basically childish. It’s also immoral on his part to have made that statement because it’s said that he who comes to equity must go with clean hands.

“You all are living witnesses of abysmal performance since he became a senator for 13 years now. We had expected senator Abaribe to first resign for non-performance. And you know that when we come to the issue of violence, he’s among those that we should query.

“Every politics is local and crime can also be local. If you check the electoral behaviour of Obingwa LGA where he came from since his entry into politics and every other thing there, you’ll see that it has not gone without crisis.

“He lacks the competence and morals to ask President Buhari to resign. Insecurity has a chain reaction. It takes a lot of systems. It’s not a one man’s responsibility. I challenge every journalist in Abia to mention how many times they’ve visited Abaribe for empowerment programme for youths of his zone? He is known for abandoning his constituents after every election.

“Put this on record. How many people today can come out today in Abia to specifically say that this is what Abaribe has impacted on their lives? Even the road that leads to his village in Ohuru community is not motorable.

“So for that singular act, he’s contributing to insecurity for not doing doing anything to help the people he’s representing. Everybody in Abia is aware that one of the areas with much insecurity problem is his Obingwa area.

“With due respect to the people of Obingwa, I must make it clear to the world that those people there need empowerment. Most of them were used as political thugs. They’ve been abandoned and today, nobody has been able to give them employment. We challenge him to publish how many empowerment programmes and projects he has attracted for his people.

“It’s not just coming out every time to talk about the president; what has Abaribe has achieved as a senator in 13 years? Nothing.”