Media personality Daddy Freeze has reacted to a post by a witchcraft advocacy group, saying witchcraft is a myth.

According to Freeze, he can not totally overrule that there is something as witchcraft but knows that it is grossly overrated in Africa.

”Although I wouldn’t rule the existence of witchcraft out completely, I know it’s grossly overrated in Africa. In my opinion, about 1% of the cases reported are related to witchcraft, the rest are borne out of the fertile imaginations of those confused by religion, culture and superstition.

“I also agree with what LEO said here “In an interview with PM News, the leader of the group, Leo Igwe, said the act of killing women and children on suspicion that they are witches is barbaric and must be stopped. He added that witchcraft and other forms of harms believed to have been caused by occultic activities are based on hearsay and misinformation, panic and anxieties, fear and superstition.” 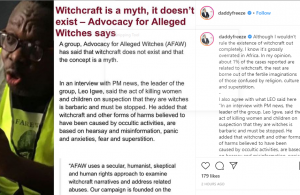