Officials of the Lagos State Environmental Task Force have demolished and burnt down a community whose residents witnessed the October 20 shooting of peaceful #ENDSARS protesters by soldiers at the Lekki Tollgate. 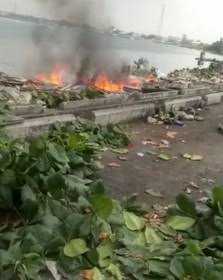 Following the shooting, some of the residents from the community were interviewed by media outlets, like CNN and Premium Times, with eyewitnesses revealing that soldiers and policemen shot directly at the protesters, killing some and injuring several others.

A claim the Nigerian Army dispelled by saying that soldiers deployed to the tollgate to disperse protesters were given only blank rounds and that “they merely shot in the air”, although it army later admitted that the troops carried both live rounds and blank bullets.

Residents of the community told PREMIUM TIMES that policemen and some officials of the environmental task force, arrived at the community on Tuesday, February 9, 2021 and told them to vacate their residences within 24 hours.

The residents, who asked not to be named for fear of being arrested by the authorities, said they were still trying to gather their belongings on Wednesday morning when a contingent of taskforce officials, mobile policemen and “persons that looked like thugs” arrived and immediately started pulling down structures in the community.

They said while a bulldozer was pulling down the mainly makeshift houses, the thugs were setting fire to the fallen structures. Policemen chased residents who were still trying to salvage their belongings far into the banks of the lagoon, injuring some of them, witnesses said.

“People were scared and thought they were going to be arrested and ran towards the lagoon where they sustain deep cuts in their legs from broken bottles that were discarded there,” one resident said.

Spokesperson of the Lagos State Environmental Taskforce, Taofeek Adebayo, who was contacted, directed all inquiries to the police for comment.

Muyiwa Adejobi, the spokesperson of the Lagos State Police Command, said he was not aware of the demolition but promised to find out. He is yet to revert on this. 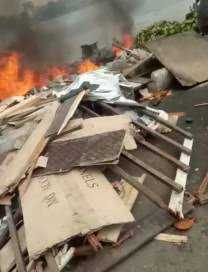 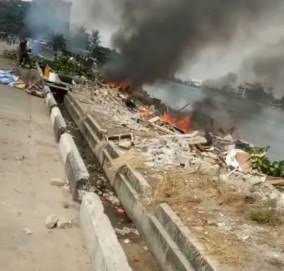 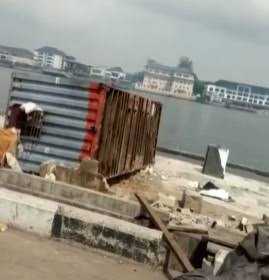