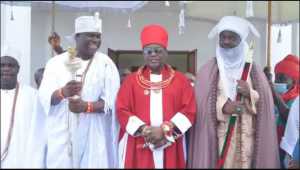 The Ooni of Ife, His Imperial Majesty, Oba Adeyeye Enitan Ogunwusi (Ọjájá II), and the Emir of Kano, Alhaji Aminu Ado Bayero, met in secret over the weekend in the palace of the Benin monarchy in Edo State.

He recalled the futile attempts of cultural imperialists to end African heritage, notably the invasion of the Benin Kingdom and the looting of Benin Bronzes more than a century earlier.

However, the Royal father thanked God and his ancestors for allowing some of the artifacts captured by the invaders at the time to return to their natural home.

The traditional leader thanked the President’s contribution and the help of other parties in maintaining the traditional institution, which in his opinion has held together.

“They took away our artefacts to remind them of their visit. But the artefacts are coming back. I want to use this opportunity to thank Mr. President, Muhammadu Buhari for his strong stance in supporting the cultural, the traditional institution; Preserving the Culture of Nigeria.

“We may not know what His Excellency has done for us… Nigerians will know; perhaps later.”

The Ooni of Ife, Oba Adeyeye Enitan Ogunwusi (jájá II), for his part, recalled the historical connections between the Benin Kingdom and Ile Ife in Osun State, adding that the purpose of his visit to the palace of the Oba of Benin was to express his people’s best wishes and inquire about Oba Ewuare II’s well-being.

Alhaji Aminu Ado Bayero, the Emir of Kano, also paid homage to the Benin throne and pledged to uphold the legacy of his ancestors and strengthen the connection between the Benin Kingdom and Kano Emirate.