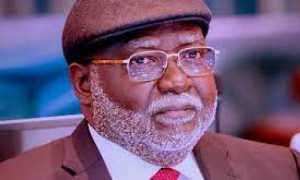 The senate has confirmed Olukayode Ariwoola’s appointment as Chief Justice of Nigeria (CJN).
The confirmation followed the screening of Justice Ariwoola by the Committee of the Whole inside the Senate chambers.
During the screening, Justice Ariwoola responded to questions posed to him by Senators.
Ovie Omo-Agege, the deputy president of the senate, Opeyemi Bamidele, the chairman of the senate judiciary and legal affairs committee, Philip Aduda, Gabriel Suswam, and Bala Ibn Na’Allah were among the senators who asked questions.
At exactly 12:45 during the exercise, Senators requested that the acting CJN be asked to take a bow and go “having sufficiently responded to questions posed to him.”
At around 12:55pm, Lawan put the request to a voice vote, and all senators agreed that the acting CJN could take a bow and leave.
The Senate then reconvened in session, where the lawmakers unanimously agreed to confirm the acting CJN’s nomination for appointment to the position of CJN.

Wike Explains Why Omehia Was Derecognised As Ex-Governor