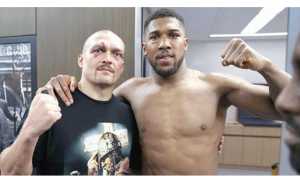 Anthony Joshua is expected to fight Tyson Fury, the current WBC heavyweight champion, in the all-British heavyweight match anticipated for December. Oleksandr Usyk, a former rival, has offered to help Joshua get ready for the fight.

The fight is expected to happen at the end of the year, and undefeated Fury is expected to enter the contest as the clear favorite to overcome his longtime nemesis.

Usyk, who is the WBA, WBO, IBO, and IBF champion, made an early service offer to Joshua by stating that he will be available to help with training if necessary between now and the beginning of December.

“If he needs my help, I will go to his camp and help him,” Usyk told Sky Sports via Boxing Scene. “He is not 40 years old, he is 33, so he should keep working.

“Anthony, don’t stop. I understand that he wanted to win against me, but Anthony can’t give up. He must go forward.”

The management of Usyk, Egis Klimas, made fun of Fury for ‘running’ away from an undisputed heavyweight match with Usyk.
READ ALSO: Anthony Joshua Accepts To Fight Tyson Fury In December
Despite rumors that an all-star fight with Usyk could be scheduled soon, Fury has been trying to prod Anthony Joshua into fighting him in a long-awaited British grudge match over the past few days.
Fury continued to criticize Joshua, who was defeated on points by Usyk for the second bout in his career last month, in a string of videos that he shared on Twitter on Thursday.
The 34-year-old is eager to pursue a fight with Joshua rather than Usyk at this time, and Kilmas has since joined in the fun on social media.
“This is an excellent way to run from Usyk,” wrote Kilmas. “Calling out others but not answering Usyk. JOKE!”

Usyk, who has recently made a name for himself as one of the top fighters in the sport in terms of pound-for-pound performance, was the opponent Fury had previously requested for £500 million.

He defeated Joshua in their first encounter to take the heavyweight titles away from the Watford native before the close of the previous year, and then he successfully defended his crowns in Saudi Arabia in August.

Following his most recent victory over Joshua, Usyk wasted no time in calling out Fury, but it appears that the concept of an indisputable matchup between the two may need to be put on hold for the time being.

The WBC has stated that it would be open to the ‘interesting’ potential of a British heavyweight fight in the near future, thus a fight between Fury and Joshua would not be prevented by Fury’s requirement to face a mandatory challenger.