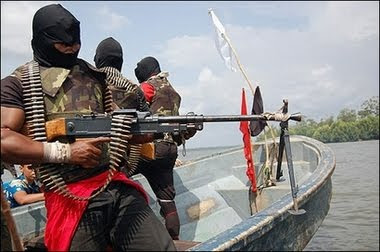 The main armed rebel group in oil-rich southern Nigeria said early Wednesday it was prolonging by 30 days its truce which expired at midnight, but warned it was not giving up the fight.
“The Movement for the Emancipation of the Niger Delta (MEND) is extending its unilateral ceasefire which expired midnight (2300 GMT), September 15, 2009 by 30 days,” the group said in a statement.
MEND, which has waged an “oil war” targeting oil installations and the military deployed in the oil hub, declared in July a 60-day truce in response to a government offer for unconditional amnesty.
The ceasefire came shortly after the release of its leader Henry Okah, who had been jailed for close to two years on charges of treason and gun-running.
The group added, however, that it “does not recognize” the amnesty offered by President Umaru Yar’Adua”that has not made any provision for meaningful dialogue on the root issues that gave birth to the Niger Delta unrest in the first place.”
It would therefore “continue fighting.”
MEND, which appeared in 2006, says it is fighting oil companies operating in the Delta and the federal authorities to ensure that the desperately impoverished people of the Niger Delta benefit from the oil income.
Militant activities have disrupted operations of oil companies in southern Nigeria, resulting in a sharp decline in production since 2006.
“The government should use this extention of time to do the right thing instead of pretending to talk peace while arming the military for a war it can not win,” the group said in Wednesday’s statement..
“The Oil and Gas industry who will bear the brunt of renewed hostilities should not be deceived by the amnesty charade or the recent military hardware purchases as this is only leading to another cycle of violence.”
On June 25 Yar’Adua offered the amnesty to all militants who laid down their arms in the Delta region.
The arms were to be handed over in centres where the fighters would be registered under a reintegration programme running from Aug 6to Oct 4.
While some of the activists have publicly denounced the militancy and surrendered their arms, there are many other groups and factions yet undecided on the amnesty offer.
MEND has not clearly stated its position as a group although one of its commanders has already surrendered some arms.
In August MEND said of the ceasefire: “We are prepared to keep it and even extend it if the conditions are encouraging.”
On Monday it said it was waiting for directives from Okah on how to proceed after the expiration of the ceasefire.
A government team overseeing the implementation of the deal said early this month a “huge” number of militants had embraced the amnesty offer making it so far a “huge” success. But no figures have been given of the estimated 10,000 militants believed to be in the region.
It also said it was holding “informal talks” with key leaders of the various armed groups in the oil-rich region of Nigeria, the world’s eighth largest oil exporter.
The violence in the Niger Delta has brought about a plunge in Nigeria’s crude production to about 1.7 million barrels a day compared with 2.6 million in 2006.